Get fresh music recommendations delivered to your inbox every Friday.

by Head with Wings 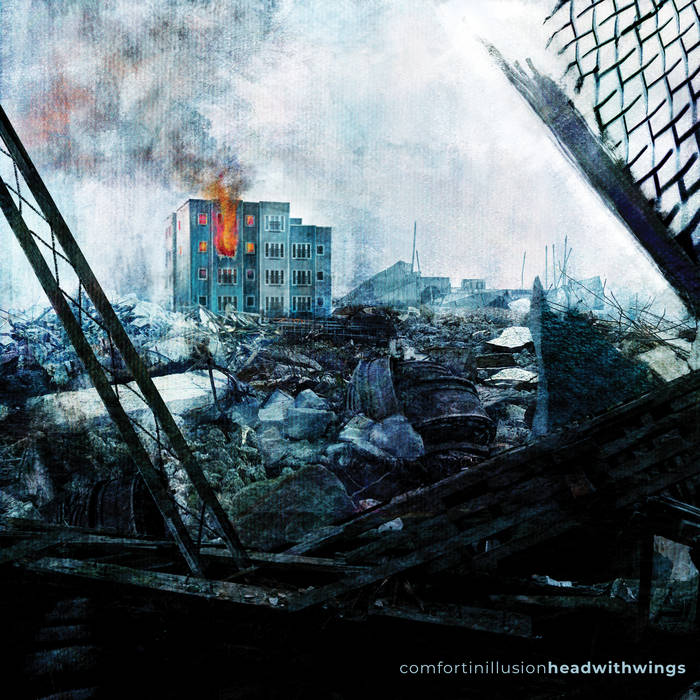 franksacramone Another great record from Head With Wings. Again, these guys show their mastery of guitar layering, storytelling, engaging songwriting, and vocal writing. HWW brings forth an emotional expressiveness and sonic quality that is wholly unique from their peers. Favorite track: Of Uncertainty.

Mick Knapton Fantastic EP, can't fault it, the vocals and lyrics are spot on and the musicianship is just great. It's heavy without getting too heavy and I love the use of acoustic guitars which give variety to the sound. Favorite track: Of Uncertainty.

Simon Rammell Great record from a great new band I just discovered from a recent PROG Magazine cover disk I bought the first CD and the new EP great music, and vocals, is cinematic a good description? Anyway buy it you won't be disappointed. Only complaint is new CD only has 3 trks - we need more of this music in our lives

Also what a great bunch of guys, they kindly signed my copy of "comfort in illusion" before posting it to me in the UK

What the critics are saying:

"Head with Wings craft modern soundscapes and massive vocal hooks on "Of Uncertainty." Twists and turns keep this pop prog number at the height of its powers."
Prog Magazine (UK)

"Bands in 10/20 years from now will be citing Head with Wings as their influence, in much the same way as early Genesis, Rush and Yes are mentioned amongst their peers today."
10/10 The Prog Space (UK/EU)

"I really like the moods the band is able to convey with their music, and I look forward to their next full length release. Honestly, this one has grown on me with each listen, so, check them out!"
3.5/5 Sea of Tranquility (US)

"The three pieces, which have a playing time of almost 18 minutes, are modern progressive rock almost to perfection."
14/15 Betreutes Proggen (DE)

"The band fits perfectly into my listening portfolio and provides me with everything I expect from a modern, progressive band. Veritable songwriting meets crisp riffs and quite powerful, modern rock, which does not come along without a well thought-out concept and catchy melodies."
9/10 Soundmagnet (DE)

"The trio of songs integrate well with each other and the flowing, almost ‘stream of consciousness’ approach to the musical and lyrical composition is both progressive and alternative – yet recognizably post-rock in style. In my view, the Connecticut collective have grown and developed since the debut album and the future looks promising."
The Progressive Aspect (UK)

"Head with Wings have the rare talent of being able to pen a modest tune that seems pleasant on first listen, but manifests into an epic which gets under your skin and never leaves your mind...this is contemporary prog rock at its best."
Metalmance (UK)

"With this three-song EP, the band takes their music to another level, I think. The songs are warm, per the usual, but more complicated and interesting, even. Their melodies are on point, too."
8.5/10 The Prog Mind (US)

"Comfort In Illusion by Head with Wings is a magnificent three song release. It had me at first listen and I immediately downloaded just about everything Head with Wings had released on Apple Music."
5/5 Background Magazine (NL)

"One of the most intriguing bands in the modern age of progressive rock, Head with Wings are masterful storytellers and immaculate musicians and any new release of theirs is a noteworthy event."
Progradar (UK)

“The amount of work that this band puts into composition, production, and distribution is professional and immensely encouraging to see in the independent prog-metal community.”
Proglodytes (US)

"'Comfort in Illusion' is a welcome addition to the stable of current favorite prog bands. It doesn’t have the darkness of Riverside or the Pineapple Thief, and it’s much more concise than, say, Transatlantic and the Flower Kings. Thankfully, it has none of the neo-prog moves that were popular for a while."
Something Else Reviews (US)

"Listening to this album I hear an amazing performance, great musicianship, creative songwriting and a superb recording. This is a band I would love to hear live and hear more in the future."
Oasis Entertainment (US)

"This set displays the true meaning of progressive by pushing the limits of music."
JP's Music Blog (US)

"American art-rockers soar above the noise and confusion to grasp a fuller picture of a person’s inner turmoil."
4/5 DME (CA)

"We will learn more next year when the next album is released, but in the immediate future, listen to these three songs with pleasure."
8.2/10 Profil Prog (CA)

"’Comfort in Illusion’ is a very good record and heralds that Head With Wings hasn't lost any of its luster and thus perpetuates the beauty of From Worry to Shame (debut album).”
Metal Sound Media (FR)

"Its cadence is smooth and growing, showing a sensitivity that erupts in chords and arpeggios delivered with an impressive mastery and a singular and precise synergy."
PostArt Rocks (BR)

"It seems like these young bloods have studied classic prog and have added their own touches to the original moves. They could easily take their rightful place in the underground."
Midwest Record (US)

"Pleasant, open and accessible progressive rock with strong, distinct and often subtle atmospheres is my summary of the contents, and those who enjoy a more atmospheric laden variety of progressive rock should feel right at home with this EP."
The Viking in the Wilderness (NO)

"The fact is, "Of Uncertainty" will be over before you know it. The variety, the clear sound and the attention to melody make it a wonderful listening experience."
Rockportaal (NL)

""Of Uncertainty" delivers the crackle of energy and ideas, the intelligence and the emotion that fans of the band’s previous release, 2018’s 'From Worry to Shame,' have been waiting for."
New Haven Independent (US)

"The whole arrangement changes direction in a heartbeat, as it takes us on a journey that allows us to dream of far off places and then brings us crashing back to earth, as this pounding rocker draws to a close with a powering guitar and drum combo that leaves you speechless."
Jace Media (UK)

"Head with Wings are actually an interesting alternative for fans of Karnivool, Dredg or The Dear Hunter."
8/10 Streetclip (DE)

"Following the example of their style mates 'Genesis', 'Rush' and 'Yes', this band tells entire stories in their powerful songs that are supported by melodic and beautifully orchestrated rock music."
Rootstime (BE)

"Prog rock with clear inspiration from Porcupine Tree, The Pineapple Thief and Pain of Salvation. It's clear, straight from the first number, that the band consists of some really talented musicians."
7/10 Metalized (DK)

"Musically, this is top produced and cleverly arranged new art rock and prog...the very clear voice of singer Joshua Corum, which inevitably reminds you of Claudio Sanchez, captivates you directly, as does the splendidly staged filigree guitar parts and the brilliant, varied play of drummer Andrew Testa."
7.5/10 Eclipsed-Rock-Magazin (DE)

"Progressive music without any keyboards or any other bells and whistles? Can, but doesn't have to work. The opposite is impressively proven by Heads With Wings."
RockTimes (DE)

"It's difficult to determine which of these three titles is the most striking because all of them have their emotional force and their evocative power...Head With Wings arises as a group to follow, perhaps a new chapter extending the already rich history of progressive rock."
4/5 Music in Belgium (BE)

"It starts tasty, but turns sublime as it continues."
Music Street Journal (US)

Comfort in Illusion was recorded at Silver Bullet Studios (Burlington, CT) between December 2019 and March 2020. The EP was tracked, edited, mixed and produced by Greg Thomas with additional tracking and mixing by Chris Teti. Mastered by Kris Crummett at Interlace Audio (Portland Oregon) in Fall 2020. All songs were written and performed by Head with Wings.

On this EP, Head with Wings is:

Head with Wings are storytellers of sound. Textured, ethereal, and blissfully haunting, the U.S. - based quartet creates boundary-pushing rock songs that straddle the aesthetic line between art music and narrative drama.

Bandcamp Daily  your guide to the world of Bandcamp